…and I wrote the following: 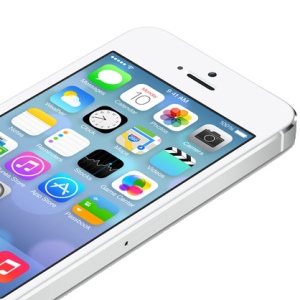 Last week, a friend of mine upgraded to iOS7. It was a big deal in the sense that he first made me look at it on both his phone and his computer, then watch a seven-minute film about the new software, narrated by an intriguing British man who turned out to be Apple’s chief designer. In rich, near-hypnotic tones, against a pure white backdrop, this god described to us the “profound and enduring beauty found in simplicity, in clarity, in efficiency.” My friend couldn’t get enough.

Lively. Intuitive. Apple’s words, not mine. For me, the new interface wasn’t lively, it was childish. Sweetly rounded letters, an abundance of color; I felt like I was using the Kidz Bop version of an iPhone. Retrieve your emails from the mailbox crouching smugly in two-dimensional squatness; complete some task on your Reminders app and its little bubble gets filled in as it slides cutely out of the way.

“We have always thought of design,” the British god assured us, “as being so much more than just the way something looks.”

Okay, I thought. I swallowed back my Kidz Bop comment. I’d give him a few more minutes.

“It’s the whole thing,” he continued in voiceover, as an iPhone 5 glided smoothly across the screen in all its profound, enduring, simplistic beauty. “The way something actually works, on so many levels.”

Okay. That didn’t justify, for me, the fact that the new Notes app didn’t have lines. How could I write notes on something that only vaguely resembled a notepad?

Call me old-fashioned, or even needlessly nit-picky, but I think I’m just nostalgic.

Who else remembers the dial-up tone? Most of us at Yale do, but my young cousins certainly don’t. How about when we hung calendars on the wall instead of making Gcal our homepage? Or wrote down every task in little spiral notebooks, ready to be checked off or crossed off or scribbled out?

A little button at the corner of one app boasts a quizzically poised miniature pencil outline hovering over a blank rectangle. Everyone knows this means “New Note.” But I can’t help fast-forwarding a century or two; once every written word is digitalized, will our great-grandkids even know what that little oblong stylus means? Or will they just think, “New Note”?

And rewind … back to when fast-forward wasn’t an option, and neither was replay. Our technological devices give us so much more than communication and convenience — they give us a vocabulary, a way of visualizing and interpreting the world. The only reason iOS7, or any operating system, is so “intuitive” is that it takes our cultural way of organizing ourselves and modifies it to make things more “efficient” and apparently more “profound.”

I like that the Contacts app has little tabs for letters of the alphabet. I like making fake Post-Its on my computer desktop to remind myself to do laundry on Mondays. And I like the little camera shutter on my phone spiraling open, even though the iCamera doesn’t even have one.

My tech-savvy friend hates this stuff, these digital imitations. They’re called “skeuomorphisms,” he tells me, before declaring them useless. Now that the tech industry has trained us how to use buttons that aren’t real buttons, how to navigate a Contacts app that isn’t a facsimile address book, there’s no more use for these archaisms. But somehow, amidst the technological craze of the last decade, as we’ve all grown up and digitalized, these visual cues are comforting. That’s what I like. Even as everything changes, some things stay the same.

We made a deal, my friend and I: I’m going to upgrade. Otherwise he’ll steal my phone and upgrade it for me. I won’t resist too much — just for these few minutes, as I listen to the dial-up tone in my head, and think about how much I like holding a pencil and making sharp, deep, definitive check marks.

“Ultimately, of course,” the god concluded, “design defines so much of our experience.”

And sure, after a few months, iOS7 won’t even bother me any more. The same colorful lettering that strikes me as juvenile now will slowly fade into my technological default, and my Notes will flourish in their lineless abode, and my experience will indeed be defined a little bit more by the British god, and a little bit less by the hordes of falling-down Post-It notes that papered our parents’ cubicles. We’ll adapt and change, and so will our phones and tablets and newspapers and our minds themselves.

So I’ll upgrade. But I’m waiting for October 1st. I’m going to hold on to my dial-up tone until then.